EV-Sales is a blog created by Jose Pontes, which tracks plug-in (PEV) sales all over the world, ranking countries and manufacturers by sales.

It's a labour-intensive job, with some countries, like NZ, freely publishing this raw data, but in others the data can sometimes be very difficult to come by. Nevertheless, he manages to produce data on about 80 models in 40 markets, twice a year.  When the #LeadingTheCharge team are looking for sales data of NZ-new PEV, this has been a major source of information for us, and therefore probably of interest to our 13,000 registered members.

Leading The Charge now boasts a Membership of 13,000.

Meanwhile, the EV-Sales blog is a subset of EV-Volumes. EV-Volumes, based in Sweden, collects data on more than just sales. They are tracking: Products, prices, batteries, charging infrastructure, regulations and incentives globally. A quote from their website, reads:

"We share a passion for EVs and their ability to make life easier and more sustainable.  EVs offer unmatched energy efficiency, operating cost and cleanness. We believe in their potential to make automobiles the most entertaining, comfortable, purposeful and affordable we ever had.

"Finding the facts in this emerging, dynamic industry can be very time consuming, often impossible. And it is not likely to be your core business either. We made it ours and want to share our knowledge with you."

Just a few important notes to keep in mind when reading this data.

2. NZ's vehicle market is largely driven by used imports. Our biggest selling PEV is the Nissan LEAF. In 2018, these were 100% imported, so don't win a podium spot. Though rumour has it that Nissan will begin selling NZ-new LEAFs in mid-late 2019.

3. While to NZ'ers low-speed vehicles may seem unimportant, from a global climate POV, they are terribly important when used in high population density countries like China and India. The shift to electric NEV in these huge numbers is gradually making a positive impact on inner-city pollution in China. This is especially so, in those regions of China which generate largely renewable sources of electricity to power them.

Belgium: This years loser is Belgium, suffering from adverse taxation and a dwindling supply of PHEVs from Germany. December was down 51% and the year by -7 %.

Mitsubishi Outlander PHEV wins 5th title in a row, but Hyundai wins Manufacturers
Plugins remain a hot item in New Zealand, last month (Dec '18), 92 units were sold in New Zealand, up 31% YoY, pulling the year result to a record 1,523 units, and placing the final 2018 PEV Share at 1.4%, more than double of last year result (0.6%). Will we see it reach 3% in 2019?
Podium Places By Model – NZ 2018
1st Place
Looking at the models ranking, the 2018 Models title remained in the hands wheels of the Mitsubishi Outlander PHEV, that thanks to the arrival of the revised MY 2019 version, scored a record 300 deliveries in 2018, making this year title, its Fifth in a row.
2nd Place
The runner-up spot went again for the Hyundai Ioniq Electric, slightly improving on the 2017 result (221 vs 206.)
3rd Place
The last place of the podium has the Tesla Model X winning its first Medal, with 146 deliveries, while its older sibling, the Model S, saw its registrations drop 16% in 2018, ending the year in #6. Is the Tesla Model 3 long shadow also hitting the Model S in New Zealand? More on that later…
Elsewhere, two fresh faces have made an impression, with the Toyota Prius PHEV shooting to #4 in its first year on the market (at the expense of the regular HEV version, that suffered heavy losses this year), while the Hyundai Kona EV ended the year in #7, despite having only landed on the second half of the year. 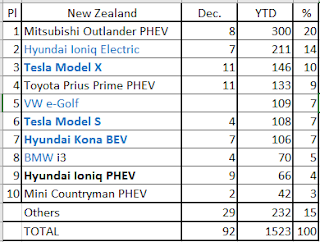 Looking into 2019, the Outlander PHEV will have a hard time to renew its Best Seller title, as the Hyundai Kona EV will build on the current performances and try to replace it on the leadership, while the Tesla Model 3, set to land on the second half of the year, should win enough deliveries to have a shot at #1.
But even if the Japanese SUV wins in 2019, the 2020 Models title should go the Tesla Model 3, as it benefits from its first full deliveries year, possibly reaching some 900 deliveries by that time.