EV Beats Ferrari Off the Mark

Electric gained the upper hand against petrol, at least initially, in a drag race at Highlands Motorsport Park in Cromwell yesterday.

A Tesla Model X electric vehicle (right) surged ahead at the beginning of a race against a Ferrari 488 (left),  the Ferrari only catching up later in the race.

Tesla Proves More than A Match for Ferrari

The muscle of a super-charged Italian Ferrari was challenged against the quiet efficiency of a Tesla electric in Cromwell this weekend. Sunday's sprint at Highlands Motorsport Park gave the public a chance to see whether electric cars really do match the hype that surrounds them.
[Simon Henderson - The News - 13 Sep 2018]
See full article and video

EV Gather in Whangarei for IDEW2018

Oscar Boyd,10 thinks EV's are good for the environment and the future of cars.
He's with Rachel Wansbone Customer excellence Manager at Northpower at the EV gathering at Whangārei's Growers Market.

Whangārei, the country's Friendliest Electric Vehicle town, launched Drive Electric Week with a convoy of EVs at the Whangārei Growers Market on Saturday.

Plug Into the Future with the Jetsons

Volkswagen's Electrify America subsidiary has put out a commercial that aims to spread awareness of electric vehicles and how far the industry has progressed, Reuters reports. The ad is part of a $45 million public education initiative. "We're trying to say with this campaign that electric vehicles are fun to drive, the range is great and charging is more widely available than people know," Richard Steinberg, Electrify America's senior director of green cities, marketing and communications, told Reuters.

With the upcoming rise of self-driving and more connected vehicles come an increased risk of hacking those vehicles with ill-intent.

Elon Musk thinks that Tesla’s vehicle security software is the best solution and he plans to open-source it for free to other automakers for a safer self-driving future.

Musk has expressed concerns about hackers gaining access to Tesla system in the past.

He said that preventing a ‘fleet-wide hack’ is Tesla’s top security priority. 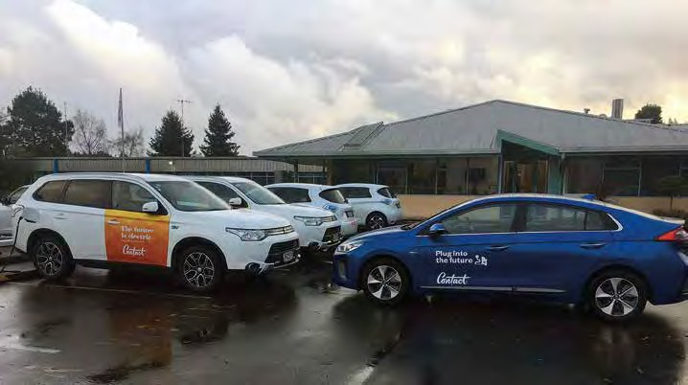 Will It Be Goodenough?

Professor John Goodenough, celebrated his 95th birthday last year An immigrant to the United States, a World War II veteran, a graduate from Yale University, a physics doctorate from the University of Chicago, a research scientist at MIT, a tenured departmental head at Oxford University, a professor at the University of Texas at Austin, an emeritus professor at the Cockrell School of Engineering at the University of Texas, Austin, a multi-award recipient, and a multi-society active and honorary member, has been involved in lithium batteries since at least 1980 when he was 57-years of age. Now, at the tender age of 96-years old he continues to develop the field.

A low-cost, safe, high-energy-density, long-life, and low-degradation battery has been designed in a paper co-authored by John Goodenough, Maria Helena Braga, Chandrasekar M Subramaniya, Andrew J. Murchison (all four from the Texas Materials Institute and the Materials Science and Engineering Program at The University of Texas at Austin) and Maria Helena Braga (from LAETA, Engineering Physics Department, FEUP, at the University of Porto, Porto, Portugal.)

It overcomes every single problem of current battery technology. In my (Eric Cosak) opinion, this happens as a result of overcoming both the lithium-ion SEI (solid electrolyte interphase) battery problem and material degradation due to volume expansion.

A convoy of electric vehicles (EVs) are buzzing into Lower Hutt this month as part of the #LeadingTheCharge country wide road trip.

The exhibition will arrive at Dowse square on Thursday 22 March after having travelled roughly half of their journey from Bluff to Cape Reinga.

Aimed at promoting electric vehicles the silent convoy of BMW i3, Hyundai IONIQ, Nissan Leaf and Tesla will allow Hutt City residents and CBD businesses to see a range of EVs, chat to drivers and even take the wheel for that important ‘test drive’.

Leading the Charge Road Trip of EVs arrives in Whangarei

Council was keen to support the 'Leading the Charge Road Trip' of Electric Vehicles (EVs) from Bluff to Cape Reinga when it arrived in Whangarei on Tuesday 3 April.

Northland is taking charge of its progression to more environmentally friendly transport options, with a national tour of electric vehicles (EVs) marking the launch of some extra charging stations.

The Better NZ Trust brought its Leading the Charge EV tour through Northland this week, stopping off in locations across the region while on its way to Cape Reinga from Bluff.

Starting in Bluff on March 14, it stopped off at Whangarei on Tuesday and touched down in Kerikeri that evening, where a charge station was launched, before landing at the Cape on Wednesday.