On 6th April 2016, 6 cars met at Cape Reinga, to kick off the annual #leadingthecharge road trip.  The aim of the road trip was to talk to as many members of the public as possible as a way of promoting electric vehicle (EV) technology.

Day one started on a bright and clear day as our group met at the lighthouse to watch the sunrise.  Our original convoy consisted of:

Cape Reinga is a sacred place to the Maori, and we wanted to honour that before we set off on our journey.  We were lucky enough to meet with Pineaha Murray, an elder of the Ngati Kuri tribe, who came and blessed our journey ahead.    We then set off on our way down towards Paihia, for our first big meet up of the trip.

Paihia was our first official stop on our trip, and it gave us an idea of what was to come.  We were met by several local EV enthusiasts, in their Nissan Leafs, who were all very happy to share their stories with us and the curious locals.  Our group of 6, soon grew, with the addition of a few Nissan Leafs.

Paihia School also paid us a visit, which demonstrates great forethought, as their students are the generation that will probably never drive a car with an internal combustion engine (I.C.E).  Chelsea Sexton, a passionate EV advocate from California, spoke to the group and answered many pertinent questions.

Day two was a day like no other.  Whangarei's Canopy Bridge was a hive of activity, thanks to Northpower, who arranged a full day of rides and demonstrations.  They had even moved 2 charging units from their usual location, so that we could continue to give EV rides throughout the day.

Local EV businesses and enthusiasts were happy to show up and give first hand accounts of EV ownership. If buying a factory EV wasn't for you, there was an ICE car, a classic Citroen Dyane, that had been converted, to demonstrate that anything is possible if you want your own electric car.

Just a couple of days after we started, we were back sleeping in our beds for a few days as we met with enthusiasts from the Auckland region.  The first stop was at Albany Megacentre on the North Shore, and the second at Sylvia Park Shopping Centre in Mount Wellington.

David Lees of Volt Vehicles, an Auckland importer of EVs, met us in Albany and helped answer any questions that the public had about the Nissan Leaf.

Despite the cloudburst, a few hardy souls still made the effort to come and see us at Sylvia Park.

Sylvia Park have been leading the charge since 2014, when they installed their first set of EV chargers for their customers.  They also generate significant amounts of power for the shopping centre from the 1,000 solar panels installed on their roof.

Charge Net NZ are creating a network of DC fast charging stations up and down New Zealand.  We were lucky enough to be able to go along to their latest openings as we made our way down the country.  Z Energy have partnered with Charge Net and opened this station at their Skyway service station beside Auckland International Airport.  We think that this location will be perfect for the rental market as well as for those people dropping loved ones off at the airport.  There is no range anxiety here!

MOTAT (Museum of Transport and Technology) was the perfect setting to talk to people about exciting new technologies now available in the transport sector, whilst surrounded by all of the history of technologies past.

Again we were greeted by local EV owners.  A family, who parked up with us for the day, enjoyed telling people  how easy it was to fit the whole family into their Nissan Leaf, including car seats.

Electric Bikes NZ Ltd, suppliers of UBCO, Smartmotion & Pedego bicycles, and Zero Motorcycles, both brought along products for people to sit on and try.  We even got a demonstration on how a folding electric bicycle can fit in the back of a Nissan Leaf.

A road trip isn't just about the destinations.  We saw so many wonderful places on our way through the country.  On our way to Thames, we came across a converted phone box now rebranded as a Spark Plug charger in the town of Waitakaruru.  It was tucked away beside the country store and the BMW i3 couldn't resist the urge to stop and have a little drink.

Once we got to Thames, we were greeted with classic Coromandel hospitality.  There was live music and tea and cakes, all put on by one of our many champions.  If it wasn't for such enthusiastic champions, who get the word out to their local community, the Better NZ Trust wouldn't be able to get our message across.

Once again the Tesla Model S cars were the draw card and Sean & Steve happily gave rides for those who was interested to experience the amazing torque of an electric motor! They were not disappointed!

On our way down towards Hamilton, we made the obligatory stop in Paeroa.  Home of the L&P soft drink where we discovered not one, but two giant bottles!  It did not escape our notice that contrasts and similarities between the old and the new were apparent throughout this trip, be it a photo opportunity or a mode of transport.

A big thank you was offered to the University of Waikato, who hosted the Leading the Charge team for the day.  We parked up within the campus and spoke to students as they strolled between lectures.  "The University also hosted a workshop at the Gallagher Academy of Performing Arts where speakers outlined the possibilities of an EV future in transportation, and University researchers spoke of their work." Click here for the university's article.

Eat Street is one of Rotorua's coolest hot spots with quality restaurants, cafes and bars, all set in a newly created pedestrian area. Lunchtime proved to be the perfect time to engage with passing locals.

The range of EVs on show grew with the addition of 2 local Nissan Leafs and a Holden Volt PHEV.

Meet Jack Giddy. In 1973 he bought a 1952 NCB Electric and lovingly restored it over 3 years. It then served as his delivery vehicle on his milk round for the next 10 years!

Despite the rain in Taupo requiring the use of several umbrellas, many local enthusiasts came to view the cars and ask those important questions. Representatives from the local lines company Unison were also present.

After a rainy morning in Taupo, the sun broke through and we were blessed with a sunny afternoon in Palmerston North.

Here we met up with the most unlikely of convoy participants - an electric rubbish truck.  This beautiful workhorse of a truck was sold to Kapiti Coast District Council by Zero Emissions Vehicles, and Andrew Rushworth was the very proud driver! Its attendance highlighted how EVs can be used commercially.  Andrew then joined the roadtrip for a couple more stops.   It just goes to show that anything is possible with EV technology.

This interesting museum is the home of one of the first electric vehicles to be manufactured. shown below this 1918 Rauch & Lang B26 Carriage Car has elegance written all over it. It is sobering to think that EVs pre-date the internal combustion engine, however the increasing introduction of gasoline meant that those early cars could travel further and the EV became obsolete.

The Leading The Charge team were up very early on a brisk morning in Wellington, as we met with Sam Wallace from the TVNZ Breakfast programme. A couple of days earlier, Sam had taken LOLGAS for a test drive which was filmed for a segment to be included in the morning's story (click here to view).  All Sam's live weather crosses to the studio included more views and chat with the trust and the assembled cars.  This was priceless publicity!

Later on that day, we re-located the cars in the Civic Square.

The area was packed as we were joined by everything from the Audi e-tron and the new Renault Zoe, to a home made electric motorcycle and a tuk tuk.  Wellington Mayor Celia Wade-Brown paid a visit and we found her chatting to Sytse Tacoma about his electric motorbike. 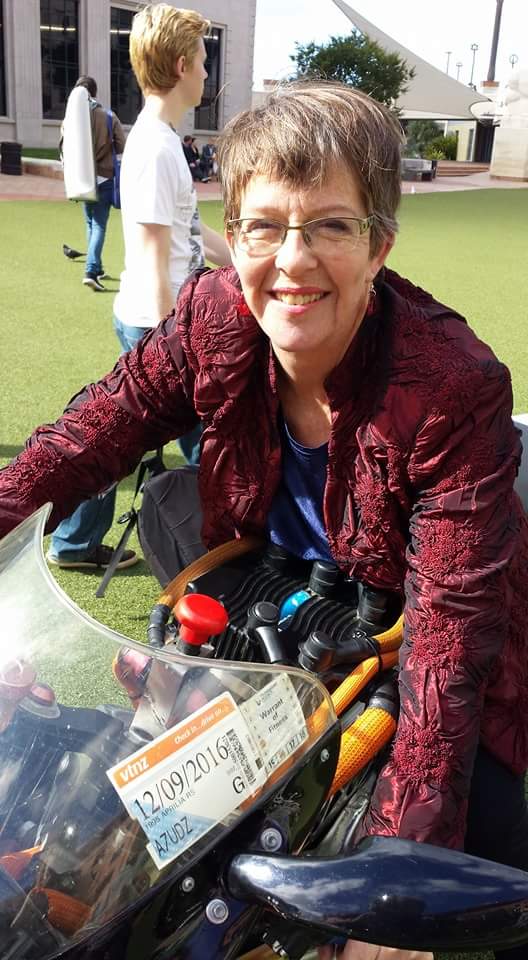 The Lower Hutt meet up took place in the carpark of The Dowse Art Museum.  The rides proved to be very popular and the rear facing jump seats in one of the Teslas was definitely a hit with the kids.  One said that "it's like a rocket ship!" The mayor of Lower Hutt, Ray Wallace, arrived in his sign written Outlander PHEV and happily shared his conversion to the EV movement.

After a brief photo op outside the Beehive, we made our way to Wellington's Harbourside Market.

We secured a prime spot along the entrance of this bustling market and, had hundreds of people flow among our cars.

We could have stayed for a lot longer with the awesome crowd that turned up on this day, but unfortunately, we had to leave for the ferry to Picton.

The South Island part of our journey commenced with a brief stop on Picton's beautiful waterfront.  It was here that we saw the last of The Loop Crew's bus, who joined us from Wellington.

We then ventured over to Blenheim, where we met outside of Herkt 100%.  One of our team had a ride on the UBCO 2x2 which left him grinning from ear to ear!  These electric bikes are certainly nothing to be sneered at.  A family also brought along their Butchers & Bicycles bike, which can carry two toddlers in the front, or up to 100kg worth of shopping.

We had a fantastic turnout at Christchurch's Cathedral Square!  Orion showed up in their Mitsubishi Outlander & local rental company Blue Cars brought along one of their Nissan Leafs.  There was also another Tesla, some Nissan Leafs, a Nissan NV-200 van and some home conversions, who all turned up to share their stories.

Our next stops of Timaru and Waimate, coincided with the opening of Alpine Energy's new fast charging stations, in collaboration in Charge Net.  Before we went along to the first opening of the day, we met up with some local enthusiasts.  Pictured below is John Watson, AKA Scooterman.  He is Timaru's original EV driver and is something of a local celebrity.  Check out his "Adventures of Scooterman" YouTube channel here.

Our last stop of the day was outside the Steampunk HQ.  Our new cars all parked out the front, in among the older machinery that greet guests as they enter the museum.  With its sound effects and pyrotechnics, the modern cars were almost outshone by the great steam train parked out front.

Our first stop on our way into Dunedin was a meeting at Blueskin Nurseries where we were told to expect some filming.  What we didn't expect, was a carpark full of EVs, all ready to convoy into Dunedin center.  It was very humbling to find so many people from the EV community, all coming to take part in our journey.

Invercargill is now home to the southernmost fast charging station in the world, thanks to Charge Net's latest installation.

Our final destination -16 days after meeting together in Cape Reinga, we arrived in Bluff.  5 cars travelled the whole length of the country, with countless other cars and people joining in along the way .  A truly top to toe adventure!